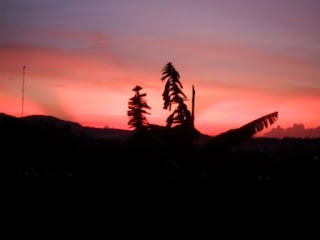 I tried to get to Nyabinoni this week and failed! I had 5 hour journey for nothing – except the experience of falling off the bike into the mud for the first time AND hailstones which felt like god throwing medicine balls at us! We were ‘bitten by ice’ as Charles said. He was mortified when I fell off and got covered in mud and later on as the rain stopped he found a water tap and literally poured water all over me and rubbed all the mud away – fortunately I proved that my waterproofs are, indeed, waterproof!
My plan was to give a presentation at the district headteachers meeting and travel up to the north of my district in the afternoon, arriving about 4pm, then spend the rest of the week there, visiting schools. My colleague had gone up the day before and we would return together on Friday. I have a great moto driver called Charles and he is safe and lovely!
I gave the presentation and left the meeting early. I had a heavy back pack because I was staying over, needed my netbook, work things etc. We set off, we left the tarmac road after an hour which meant at least 3 hours on dirt tracks – it is like scrambling rather than motorbike riding. An hour later the wind blew up (I’m beginning to know the signs!) – a warm wild wind – we put on all our waterproofs, then the rain started - it lashed down, but not just rain – ice balls!!! We were pelted by ice balls – I have the bruises to prove it. We needed some place to shelter , the track was becoming very slippy and dangerous. We pulled into a little sheltered place where there were other people. The local people told us that the road was blocked up ahead and it was not possible to go any further – I phoned my colleague who confirmed that the rain had been very heavy and it was bitterly cold – not the picture we have of Africa is it?! So we decided we should turn round and go back. The rain had stopped by this time. The journey along the track back to the tarmac took us two hours – it was extremely muddy in places and I had to get off and walk,(my preference by this time!) I fell off once but it was a gentle slide off into soft,wet mud rather than a ‘thrown off’ situation. Charles was mortified!
We continued on our way slipping and sliding and stopped at a water tap – Charles literally washed me down from head to foot!! – he was pouring water all over me and rubbing off the mud with is hands! By this time my bag was twice as heavy because of all the water he poured over it! I was aching all over and my back was so sore and stiff with carrying that weight – lesson – even if you’re staying overnight don’t bother taking anything – seriously I’m not going to take spare clothes or anything next time- just soap and toothbrush! We arrived back at the tarmac road and we were both relieved – it was another hour before we got home. We had set off at 12.30 and arrived back at 5.30 and basically got nowhere!
Oh well! Just another day in Rwanda
The next day was bright and clear and the sunset glorious.
Love to you all. Tx
Posted by Tricia, Rwanda at 20:19

The view from the school