The villagers grow a lot of their own food, including various types of bananas, maize, beans, casava etc

In the first photo you can see the maize (corn on the cob to us!)which has been growing around the houses. 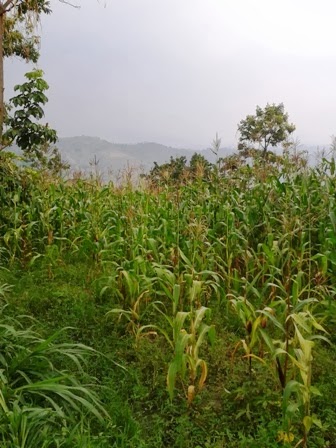 In the short film you will see the maize (corn cobs which taste nothing like the sweet corn that we are used to) When it is harvested it is put in the sun to dry and it can be stored before being cooked on the charcoal burner.

One day when I was working for VSO and I was visiting one of my regular schools the female teacher, Pelargie, said:

"Yes, I have some here for you to taste."

With that, she produced some cooked corn cobs - maize!!!I was so relieved I ate the offering thankfully.

Lots of love and warm wishes from Rwanda, Tx

As you know I visited the school in the village last week and spent two lovely days with the new children. I will be visiting them again in a couple of weeks, but this time I just wanted to get a ‘feel’ of where we are up to and to meet the new intake.

All of our children except 2 have been promoted to Primary 1 at the nearest Primary School where we have links and where I will be doing some training with the teachers. At the moment, because we only have use of a building which does not belong to us but to the local church, we are unable to develop the space into a quality Nursery learning environment. But, even so, the work that Gabrielle, our teacher does with the children is inspiring. He clearly loves children and enjoys their company, He is firm but kind and he uses interactive methods when he can. He not only teaches but he is also a focus in the community for advice on other matters, often concerning health issues.

The school year in Rwanda runs from January to November and so at this time of year Gabrielle is very busy registering new children and passing on reports of children who have moved up to P1. Every day parents or grandparents bring children to be registered, building up to a maximum of 60 (theoretically).

On my first morning back in the village I left the house and walked up to the school. I strolled past Mama’s coffee plants and through the banana trees, coming across familiar sights and sounds. The view of the lake opened up before me as I passed the homes of friends. People greeted me with big smiles and happy handshakes.  I climbed up the rough steps carved into the hillside by human feet and came to the rough church building which acts as our school base. As I rounded the corner my eyes were awash with the sight of little children playing in the sunshine. I saw Gabrielle with skipping rope in hand giving a demonstration of how to skip! I saw another group of children playing hopscotch in the dirt.  I spied the new water tank and mothers by the new water tap, washing the pots after serving the porridge. It was a happy and healthy scene!


Our school is very basic at the moment but we have plans to improve with the support of friends in O2R, Canada. When the children enter the classroom they sit on the benches in rows, girls on one side, boys on the other. When all 57 were assembled Gabriel greeted them warmly. I introduced myself and they giggled to hear me speak in Kinyarwanda. The first session was about learning names and Gabrielle patiently asked each little one to say their name out loud. Some of these children are very shy and quiet, whilst others are only too pleased to stand up in front of everyone and shout their name out loud! The Teaching Assistant, Esperance sits on the benches with the children to give them encouragement and to take them to the toilet when they need to go. 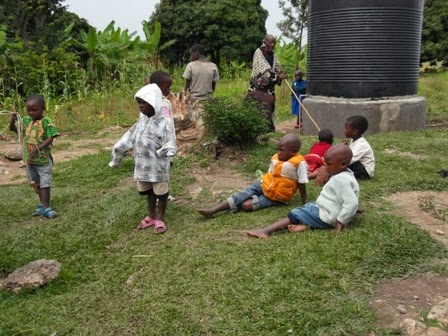 After the next outdoor play session Gabrielle uses a rice sack teaching aid to extend vocabulary in Kinyarwanda, getting children to think about what is missing in these pictures. This will be the first time these children have seen pictures of any kind.

Parents also often bring children who have particular health needs or disabilities and ask for advice. In these situations it is very difficult because we have such limited resources. The Rwandan Government has a policy of Inclusion of children in schools, which is fantastic. However, if a child has problems walking, how can he get to a school when the journey is a walk of more than one hour over difficult terrain? And if he does manage to get to school, what facilities will there be for him there? All these are difficult questions for the school system on top of all the other challenges.

Anyway, that's all for now. Sorry about the poor presentation. I still don't understand what happens to the font colour and background colour sometimes even after 3 years of posting this blog!!

Lots of love, Triciaxx
Posted by Tricia, Rwanda at 12:55 3 comments:

This is my first attempt to post videos so I hope it works out.

As you know, whilst I was at home in England I requested knitting wool and needles to take to Rwanda and I was inundated with gifts. Thankyou.

In the previous post you saw the wool being carried up the steep hill to the guesthouse. In this film you will see them knitting with their own needles and wool. I realised that they only have one size of needle and one type of wool. So they are not used to knitting with different sized needles and thicknesses of wool. It is a challenge to teach them, but I will try. I wish my friends from the knitting circle at home were here to help me! They are far more accomplished than I.

This lady is knitting a jumper (umupira)with many different colours. We hope that the Knitting Assocaiation is the beginning of a Craft Training scheme which will earn money for the workers. We want to buy a non-electric knitting machine. They cost about £300. Our friends in Canada have already provided three hand sewing machines and the ladies will receive training.

The next part of the plan will include training in carpentry and other skills.

Apologies if the video clip doesn't work for you. But thanks for reading the blog. When I come home to England i have lots of other film clips.

New Years Day 2014 saw me at Manchester airport once again and it wasn’t long before I was soaring into the clouds. It took many minutes to get through the thick cloud layer that was covering the whole of the UK that day. As we left Manchester it was a cold grey day with rain lashing onto the tarmac, but even so I was reluctant to leave.

I’ve had such a wonderful summer and autumn, living in my unusual home and re-establishing my life in a new town. I recognise that so many things have worked together for me, resulting in an enhanced and simpler life in England. But then I felt the sun on my neck coming through the window of the aeroplane – and it was good! I was on my way back to Rwanda...

I first came here three years ago and stayed for two and half years, so I got to know the country quite well. As we drove from the airport in Kigali I experienced the familiarity of the warm night air, the many people walking in the streets, the ever present motos looking for passengers and most of all the enthusiastic welcoming smiles on people’s faces. I felt I was coming to my second home country.

I spent the first few days in Kigali, making the most of some luxury foods and meeting with friends who stayed behind to make their lives here. Even in the 6 months since I have been away there have been big changes in the city. Like any capital city, it is the wealthiest part of the country. There is a noticeable increase in cars – not old bangers but big expensive cars. The city streets are clogged already and in another 6 months there will be big problems. I never understand why emerging cities want to follow the mistakes of ‘developed’ cities. Surely everyone knows that with wealth comes traffic and that traffic should be kept out of the city centre... Will I see ‘Park and Ride’ when I come again?

My plans for the seven weeks were vague – but that’s normal in Rwanda. However I knew I wanted to get to the village as soon as possible so that I could work out how best to spend my time in helping to develop the Nursery School. Getting to the village can be difficult, but the best way is by bus and boat. From Kigali we have to take the bus to Kibuye and Lake Kivu – surely one of the most beautiful places on earth? The journey takes most of the day whichever way you do it. I met my friend Alexis, who is the local co-ordinator of the project, at Nyabugogo Bus Park.

I enjoy the sights and sounds and all the activity of the bus park at Nyabugogo in Kigali, but some people hate it – love it or hate it you have to go through it! Once safely on the bus we’re on our winding way. At Kibuye we buy provisions for the week including a big sack of rice and another sack of Irish potatoes. Mama is waiting for us on the boat down by the shore.


This time the boat journey was easy because the lake was calm. We chuntered along for two and half hours and as the ‘home hill’ came into sight I felt my heart rejoice. The boat pulled into the shore and we began the steep climb to the top of the hill. I had with me the big bag of knitting wool which was donated by so many kind friends in England (about 18kg). One of ladies put it on her head  and carried it up the hill.

We were almost at the top of the hill when I came across the first water tap.  I was so excited to see the women drawing water from a tap so close to their homes. It is thanks to our Canadian friends in the group Ottawa 2 Rwanda that the village now has 3 water taps. The other two are strategically placed – one by the church/ school building and one at the guesthouse.Website address: www.Ottawa2Rwanda.org and on facebook.

When we got to the guesthouse, there was more excitement as I was shown the bathroom now with flush toilet, sink and shower!

I’ve included the photo of the family cow because when a Rwandan man gets married it is the tradition to give a cow to the family of his bride. But after a few years the bride’s family return a cow to the groom. This cow is the child of the original cow that was given when Alexis married his wife.

Love to all my friends and family, and strangers who are as yet undiscovered friends! Tricia
Posted by Tricia, Rwanda at 20:44 5 comments:

The view from the school